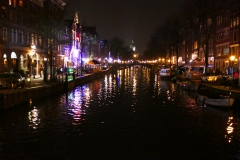 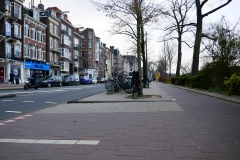 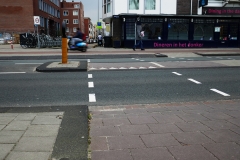 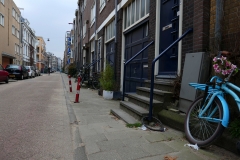 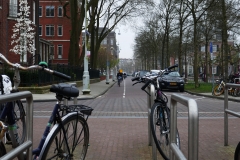 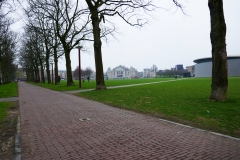 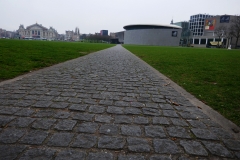 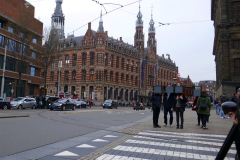 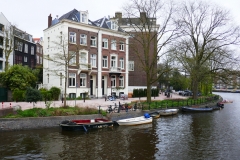 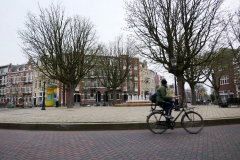 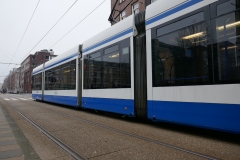 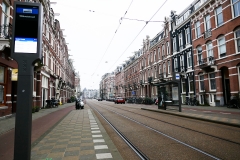 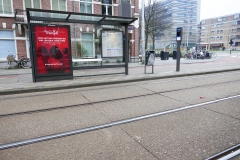 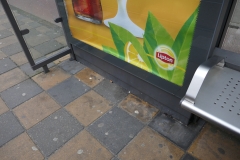 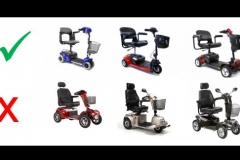 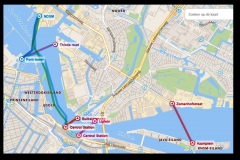 Bikes, cobblestones and steep bridges in Amsterdam? Yep, you can count on it, but there are ways to deal with barriers if you’re traveling with a wheelchair. In a city with so much water incorporated into it, you can expect a lot of bridges, especially around the canals, and some bridges were too steep to pass even in a power wheelchair. Not to worry, there are a ton of bridges in Amsterdam, so just go to the next one and see if it’s possible to cross with your wheelchair. With a power wheelchair, going down backwards is the best way to control core balance and not fall out of the chair when going down steep inclines. In my manual wheelchair, I wheelied down frontwards with my center of gravity level. I had to go slowly and use a lot of muscle control and balance. It wasn’t easy, but I did it a number of times.

Sidewalk access is often made of cobblestones varying in size and choppiness, but there are sections of the city with fewer cracks. Most power wheelchairs will manage fine wheeling the city, but manual wheelchairs may get slowed down by uneven surfaces; some sidewalks and crosswalks I avoided entirely. Around the active Amsterdam City Center (Centrum), some sidewalks were smoother than others; sometimes just crossing the street made a huge difference in surface makeup. Amsterdam is nearly flat and level, so changing sides or finding the most suitable wheelchair accessible route to where I wanted to go was always possible; sometimes a longer route, but I found the way.

The pathways through the park near the Van Gogh Museum are all small cobblestones, which I definitely avoided in my manual wheelchair. In addition to this area, manual wheelchairs may find the cobblestones around the red-light district too worn and uneven to explore for long, especially at night. Nighttime is when the right-light district of the city glows and is the most crowded. Many, mostly tourists, are strolling around “window shopping” in the red-light district while drinking, which can be cumbersome to navigate by wheelchair because at this height it’s harder to see.

Bikes, as the world knows, are the primary form of transportation in Amsterdam, and some cyclists ride fierce and fast. If you have enough speed, traveling in the bike lane provides the smoothest and fastest routes while exploring Amsterdam by wheelchair. When in my manual wheelchair, I worked up momentum on the walking side until I was going fast enough to enter the biking lane seamlessly. Listen for oncoming bikes, and make sure you look all around when exiting because some bicyclists will be trying to pass. Bikes pass those moving slower regularly. While I was visiting Amsterdam, I gave the majority of bicyclists the right a way, but one or two were moving slowly enough to jump ahead of.

Whether traveling on the sidewalks or in the bike lanes, the most important thing to remember when cruising around Amsterdam in a power or manual wheelchair is to pay attention to your speed and the speed of those around you. Amsterdam is a popular travel destination, so there are many locals and tourist cruising around the city. For one, don’t jump into either lane if it stops another person, and pay attention to the direction and speed people are traveling. If you are looking to rent a bike while in Amsterdam, Star Bikes and Accessible Netherlands are companies that offer adapted and modified bicycles so they are accessible for all.

Trains, Trams and the Metro Subway

Both the Tram and the Metro Subway are commonly used to get around the sites and attractions in Amsterdam, where the train is used for long distance travel outside of Amsterdam. The trains, Trams and Metro Subway offer wheelchair access that includes wider entrances, ramps, elevators, and some level platform access to get on and off the train. The Amsterdam Centraal train station has wheelchair accessible bathrooms and some of the metro subway stations do as well, but cleaner facilities are located at museums or other attractions. To ride, a wheelchair or scooter must be less than 120cm long and 70cm wide. Some scooters are also not allowed, see photo in gallery for examples. Despite some accessibility modifications, the tram and metro subway have obstacles that hinder wheelchair travel.

The biggest barrier for both the Amsterdam tram and metro subway are the gaps from the carriages/cars to the platforms. The gaps can be as little as two inches or close to six inches. Occasionally they are level, but mostly not. The metro subway fleet M5 Series provided the smallest gap, but overall there was no consistency. After selecting your route, you can tell what stop/station is accessible if there is a closed circle icon image, but this doesn’t include information about gaps. Both the metro subway and tram websites say assistance may be needed to board or depart because of the gaps. I agree with the disclaimer because the gap variation changes so drastically that it’s up to the individual to determine whether or not it’s possible to get on and off or travel alone.

In the video below, it shows the tram attendant coming out with a ramp so the passenger with a wheelchair can board. However, though this is what’s supposed to happen, I didn’t once experience any such ramp assistance, so I concluded this policy wasn’t really in practice or enforced, or people are not being trained properly. I tried using the tram at different locations and times of day and never saw a ramp. A few times I got lifted into the tram car by strangers after no response from the driver, though it was obvious I was trying to board.

If traveling in a manual wheelchair, I recommend exiting the carriage/car backwards so that the big back wheels cover the gap. Another way to exit is to wheelie frontwards after popping a wheelie, so the small wheels don’t touch the gap. To get on, pop the small front wheels up and onto the train and then pull the back of the wheelchair up and onto the train. Still, these on-and-off tactics may not be suitable or safe for all travelers, depending on ability, chair type, size, weight, etc.

Often the tram station is on an island platform off or on the street, and the landing pad is just wide enough for a wheelchair. In other words, no maneuvering room or room for error in wheel placement or you’ll fall off the edge. Tram stations may also be misleading to get to. When getting to the tram, it may take some time to navigate an accessible pathway to get onto the station platform; some access points are misleading, and one ends up having to get on the opposite side, which takes more time crossing streets. I missed my tram more than once.

The Dutch National Railway offers the best wheelchair access, but not so much getting around the sites and attractions in Amsterdam. In addition to access details already mentioned, access to a toilet on the train is possible but depends on how new the carriage or car is. More details about wheelchair size regulations, etc. When booking a train trip with a wheelchair, it’s important you set it up at least one hour in advance to ensure proper boarding assistance. You can call NS Service Center (030-2357822 or go online.

Buses in Amsterdam have ramps and spaces for wheelchairs; however, not all drivers are knowledgeable or willing to operate the ramp controls. Sometimes the buses were so full that getting a wheelchair on it, especially a power wheelchair, would involve removing several people and lots of added route time for the bus driver. In these cases, I waited for another bus or kept rolling. Only once or twice did I insist on boarding the bus when my power wheelchair battery was running too low, or I needed a break from the cold weather.

Access on and off the bottom level of a ferry boat around Amsterdam is possible by a large ramp, used by all to board. Ferries are free for everyone and take people across the IJ River. Smaller tour ferries are seen all over the historic canals, and the Blue Boat Company has accessible lifts available for people wheelchair traveling.