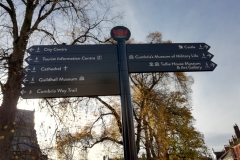 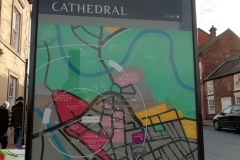 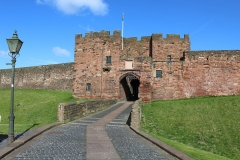 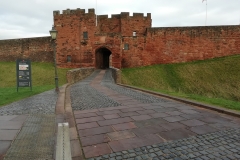 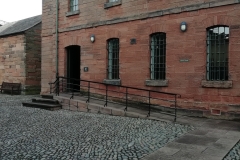 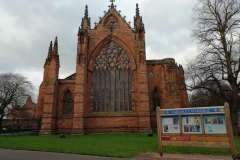 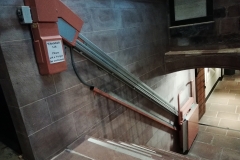 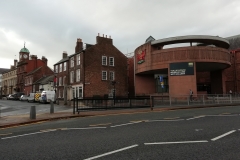 Carlisle is the only city in Cumbria, the most North Westerly County in England. It is a small city, but with plenty of history and attractions due to its location; less than 10 miles from the Scottish border and close to both the Lake District and Hadrian’s Wall. Carlisle has over 2000 years of history. Celts, Romans, feuding Border Reivers and invading armies have all left an intriguing legacy for you to explore. Carlisle was established as a Roman settlement to serve the forts on Hadrian’s Wall. Nicknamed the Great Border City, Carlisle is the most besieged place in the British Isles, having been besieged at least ten times. There are numerous signposts in the City Centre directing you to the main attractions, including walking time. Below are Carlisle attractions accessible with a wheelchair. Getting to and around Carlisle is possible with accessible public transportation.

Carlisle Cathedral: In 1122, King Henry I approved the foundation of a priory in Carlisle. The town gained the status of a City when it’s diocese was formed in 1133, and the priory then became Carlisle Cathedral. The Cathedral is on Castle Street, so is very close to the Castle. During the time of the English Civil War, a portion of the nave of the cathedral was demolished by the Scottish Presbyterian Army in order to use the stone to reinforce Carlisle Castle (the Castle has changed hands between the English and Scottish over the years). See if you can find the face in the ceiling. There is a wide tarmacked road leading to the entrance door, then level access through the main door – volunteers are available to assist if you need help with the door. All of the Cathedral has wheelchair access, there is level access to the North and South aisle and the choir. The high altar is accessed via portable ramps, and there is a platform lift down to the Treasury.  The bell tower does not have public access. Entry into the Cathedral is free, however donations to the running costs of the building are appreciated. Limited blue badge holder parking is available in the Cathedral grounds, and there is a temporary accessible toilet available at the rear of the car park.  As the Cathedral is in the City Centre, there are lots of cafes and restaurants nearby, like the Cake & Ales coffee shop.

Carlisle Castle: Because of its proximity to Scotland, Carlisle was an important military stronghold. Carlisle Castle was built in 1092 by William II, the Castle is strategically located on the border between England and Scotland and has witnessed many attacks over its 900 year history, and once served as a prison for Mary, Queen of Scots. Despite its turbulent history, the Castle is still relatively intact. Once in the Castle Grounds, you have a great view of the inside of the Castle walls, however only the Castle exhibition itself is accessible (via a ramp). Inside the exhibition there is a single accessible toilet with grab rails and room to side transfer.  The Castle holds events and a portable accessible toilet is available for use during these events. I found the accessible portable toilet to be large, with a small threshold, grab-rails and room to turn. However, with a mid-wheel drive powered wheelchair, I was quite far forward of the toilet bowl for transferring. With a manual chair or rear wheel powered wheelchair, that wouldn’t have been such an issue. Blue badge holders can drive into the castle grounds and park free of charge. Alternatively, if you are wheeling from the Cathedral or Tullie House, use the pedestrian crossing to cross Castle Way and then use the paved walkway over the cobbles, through the Inner Ward on to the Keep (where the exhibition is).

Cumbria’s Museum of Military Life is located in the Castle grounds, and tells the 300-year story of Cumbria’s army regiments. Cumbria’s County regiment, the Border Regiment made its head quarters at Carlisle Castle. From 1720 to 1959 the regiment fought in many campaigns including the French and Indian War, the Battle of Culloden, the First World War and the Second World War. The regiment was amalgamated with the King’s Own Royal Regiment (Lancaster) to become the King’s Own Royal Border Regiment and subsequently the Duke of Lancaster’s Regiment. The military museum, has level access to the ground floor, where the main collection is. The upper level houses temporary exhibitions, and you would have to be able to transfer to a stair-lift in order to go upstairs.

Tullie House Museum and Art Gallery has artifacts,exhibits and displays on a range of topics including art, archaeology, natural history, local and social history from prehistoric times to the present day. There are three entrances to the Museum: Annetwell Street (main entrance), Castle Street and Abbey Street. Entrance is via paved pavements/sidewalks. The Castle Street & Abbey Street entrance both lead to a ramp with push activated automatic door. The main entrance has level access, also with push activated automatic doors. Two wheelchairs are available for use at the museum entrance, which visitors can either request upon arrival or pre-book a chair by calling 01228618718 or email enquires@tulliehouse.co.uk. There is a restaurant on the ground floor.The restaurant has one set of double width automatic door. It is a self-service restaurant with coffee, cakes & main meals. Restaurant staff will help carry things to your table. There are some higher tables, all with removable chairs.

The Museum is set over three floors. In the basement is the Roman Frontier Gallery, the ground floor houses the gift shop, restaurant and temporary art exhibitions, whilst the first floor is home to the majority of the museum. Lifts are available to the basement Roman Gallery and the 1st floor Borders Gallery. There is a ramp to the lookout area which gives great views of the Castle. A single cubicle accessible toilet is available in the basement, another on the ground floor & 1st floor. Only the temporary exhibitions have information available in large print. However the museum is due to change it’s exhibitions in 2019, and they have said that large print information will be available once this has happened.

The Curse of Carlisle is a 16th-century curse that was first invoked by Archbishop Dunbar of Glasgow in 1525 against cross-border families, known as the Border Reivers. For the millennium celebrations, the local council commissioned a 14-tonne granite artwork inscribed with all 1,069 words of the curse. Following the installation of the stone, Carlisle suffered floods,foot-and-mouth disease, job losses and a goal famine for the Carlisle United Football Club. The stone is accessed from the lower ground floor of Tullie House.

Bitts Park is a peaceful haven only 800 metres from the City Centre, & next to Carlisle Castle. It is located at the junction of the rivers Eden, Caldew and Petteril, & includes formal gardens, riverside walks, children’s play areas, splash park and sports facilities. There is a flat accessible push around the park and the side of the castle, see here. The pathways are tarmacked. There are no bathrooms available in the park.

Rickerby Park opened in 1932 as a memorial to the fallen of the Great War of 1914 – 1918. It is a natural open space, on the banks of the River Eden. The parkland is dotted with mature trees, beneath which cattle and sheep graze. Although not listed as accessible, there is an accessible riverbank path (fully on tarmac) from the ‘Eden bridge gardens’on Stanwix bank. The path follows the sweeping bends of the Eden and by crossing the Memorial Bridge, you can complete a circular walk back to the city centre on the opposite bank. For more information, see here.  There are no bathrooms on the route, however there are accessible bathrooms at the Sands Centre. These are single person cubicles, with grab rails and room to side transfer. The above routes are the nearest to the town centre, and the biggest in the City. Search for more accessible routes here using the wheelchair icon.

The Old Town Hall is a prominent two story Grade I Listed Building of Medieval origin from the 17th century. The Old Town Hall sits in the Green Market. In front of the building is the Market Cross (1682), an ionic column with a lion and a sundial at the top. The Tourist Information Centre is now based on the top floor, which is accessed by a platform lift. The Tourist Information Centre provides information on what to see and do, entertainments, events, tickets, places of interest, travel, transport,and where to stay.  An accessible single cubicle toilet is also available. Only some of the information is available in large print. Outside is a replica Victorian pillar box, erected in 1989 to commemorate the fact that in 1853 Carlisle was the 1st place in mainland Britain to have a roadside pillar box.

Carlisle City Walls were built as a defensive structure surrounding the City. The Walls ran from Carlisle Castle to The Citadel. Between these points, the city was protected by the former North and East Walls (unfortunately demolished around 1811), but the West Walls remain largely intact.  The perimeter, including the castle, is approximately 1.4 miles long. You can wheel along West Walls, which runs behind Abbey Street, up to the Viaduct at the Southern end of the pedestrian shopping area – a good short cut to avoid the crowds! The route is along the pavement/sidewalk, which is paved.

The Tithe Barn is thought to have been built in about 1480. It has had a complicated history, functioning as a barn until the Dissolution of the Monasteries by King Henry VIII, and then as a stable, dispensary, dwelling house, and joiner’s shop. Although only open for events, you can view the Tithe Barn from West Walls, or by going past St. Cuthbert’s Church. There is a portable ramp available if you are attending an event there.

The Citadel Towers are the first thing you see when you arrive in Carlisle by train. The former law courts were designed by Thomas Telford, with the eastern tower incorporating part of the 16th century building.  The first Citadel building was a Tudor fortification replacing the medieval Englishgate. The Citadel is open for guided tours during the summer months, but the tour includes many stairs and isn’t wheelchair accessible.

Shopping: The City Centre is largely pedestrianised and the Lanes Shopping Centre is home to around 75 stores. There is a changing place/table in the Lanes Shopping Centre, as well as 2 individual accessible toilets. All of the shops in the Lanes shopping centre have level access. The shops are of different sizes, most of the larger stores have accessible changing rooms, but some of the smaller stores don’t. Alternatively, the covered Victorian Market Hall has everything from homewares to fresh food. It is accessible via a ramp from West Tower Street, or level access from Scotch Street. There is a small threshold into most of the stalls, however there is a portable ramp which can be used to access the stalls.

I'm Claire. I live in Cumbria, in North West England, near the beautiful lake district and a short distance from Hadrian's Wall and Scotland. I've used a wheelchair since 1999, as I have a bone condition. I mainly use a manual wheelchair, but due to repeated soft tissue problems I use a power wheelchair for distance too. I love exploring the world and have been to some amazing places including Europe, Cuba, and this year a tour of the American Canyons. I hope you enjoy my articles, and find them useful.