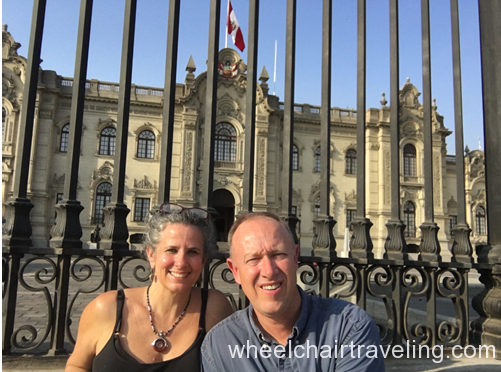 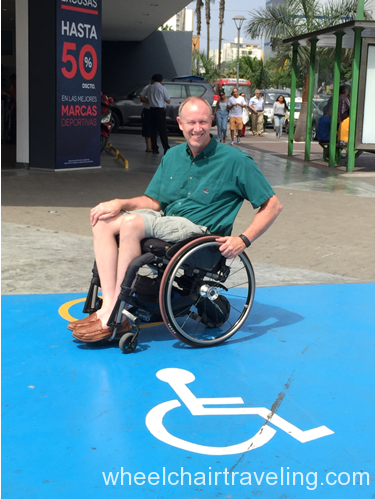 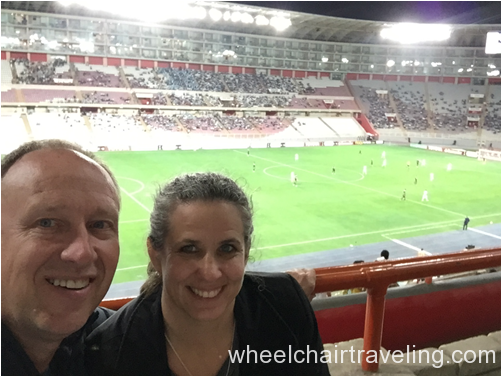 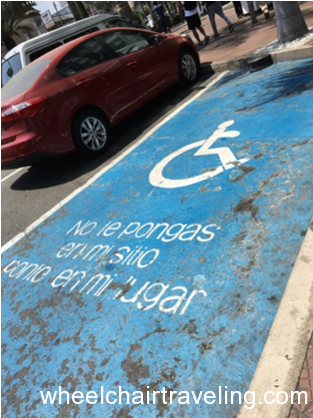 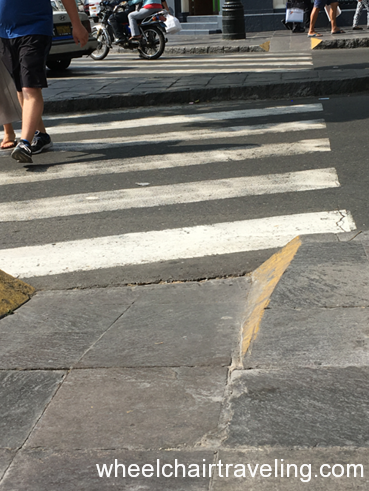 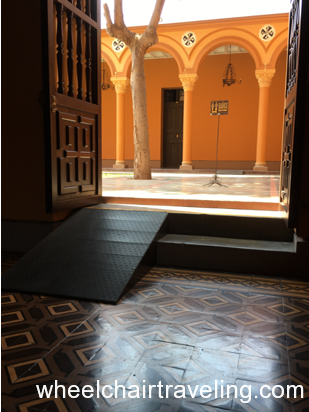 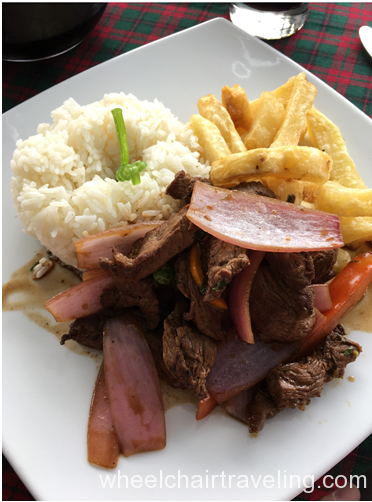 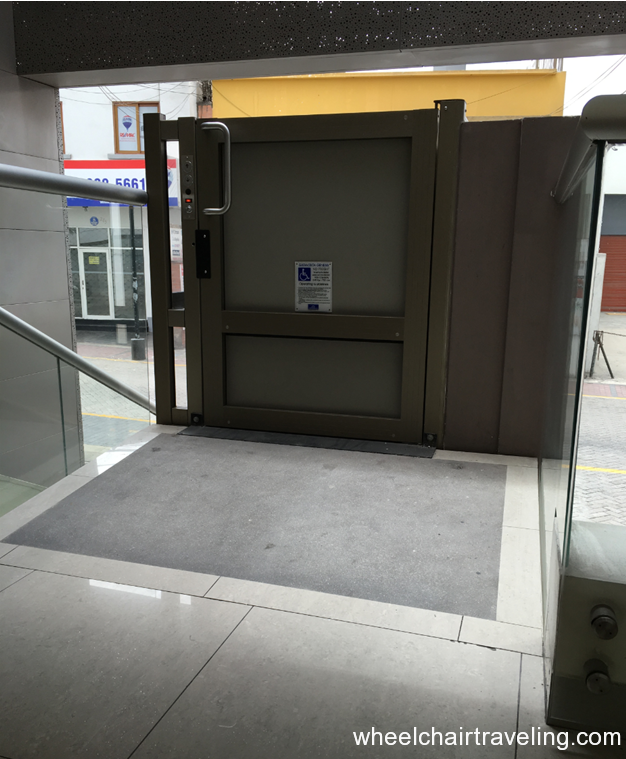 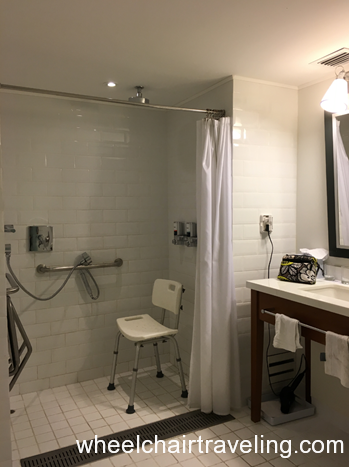 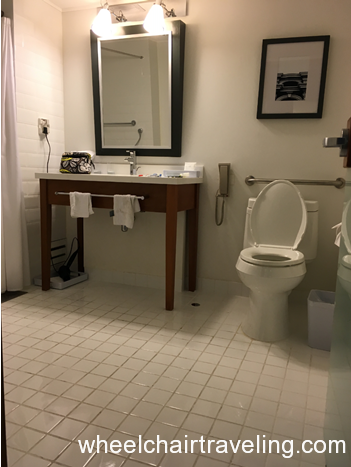 If you ever have the opportunity to visit Peru, take it!  Lima is a vibrant city of about 25 million and is full of things to do.  One of the things Lima is most known for is its food.  If nothing else, you can entertain yourself by trying out the many restaurants with amazing dishes.  You can also visit museums, go to the beach, and take bus tours (Mirabus).

Between 2009 and 2014, Lima passed several laws guaranteeing rights and accessibility (both public and in places of work) for people with disabilities.  As a result, it is a moderately accessible city.  It is not to the standards of the US ADA, but Robert had very few problems getting to where he needed to go.  There were no issues either arriving at or leaving the airport, other than that there was a lack of aisle chairs to exit the plane when we arrived.  After waiting for some time after we landed, the crew finally used the chair that stays on the plane.  We still got to the luggage carousel before our luggage did, so it did not overly detain us.

We stayed in Four Points by Sheraton in Miraflores.  Miraflores is a very walkable, upscale area several blocks from the beach.  It is also walking distance to a variety of handicraft markets, where you can buy all kinds of mementos from wallets to sweaters to paintings to furniture.  Just be sure you can take it all home!  The terrain in Lima is relatively flat with some minor inclines here and there.  Robert has a SmartDrive, which comes in very handy when you’re going long distances.

With respect to accessibility, many of the sidewalks are at the same level as the street, eliminating the need for curb cuts.  Where they are raised, the curb cuts are on almost every corner and are perfectly adequate.  Most of the stores are accessible but often are retrofitted with ramps that may be kind of steep and/or narrow.  However, occasionally there is a miss, such as the time Robert went to cross a boulevard.  There were curb cuts on both ends, but they forgot to put them in the middle.  He had to go down the street a block to cross.

Traffic in Lima is CRAZY!  We spent a lot of time trying to figure out the rules and eventually gave up.  We would not recommend renting a car unless you are very comfortable driving in a lot of chaos.  When walking/rolling around, it’s important to be aware of the drivers, especially when crossing the street.  A family walking near us narrowly missed getting hit.  Be careful!

Four Points by Sheraton generally is an ideal hotel for wheelchair users.  They have accessible rooms with roll-in showers and lots of room for maneuverability, even in a power chair.  They have an outdoor lift to get from the sidewalk to the lobby level, and there is no self-service.  We joked that it was like being in an episode of The Three Stooges each time Robert needed to use it during our first few days.  For some reason, it took three people to operate it, and either they were not all there, or they were there but didn’t know how to operate it.  Each time we approached it they seemed to be filled with panic.  After a couple of days, we spoke to the manager about the issues, and it improved substantially.  The employees were very kind and helpful.

The possibilities for good food are endless.  Some of the things that Peru is most known for include Pisco Sour (a refreshing drink made with Pisco, a Peruvian liquor), ceviche, and Lomo Saltado (sort of like a stir-fry), as well as the ever-abundant seafood.  Some of the restaurants we tried:

We found that the best way to get around is with Uber.  There are about 3000 drivers in Lima – they are very professional and it is quite inexpensive.  It’s also easy as you don’t need cash.  None of the drivers ever had a problem with the wheelchair, and we were able to get anywhere we needed to go.  You will not find many people in Lima who speak English, so that is something to be aware of if you use Uber or other taxis.  There is also no problem in using regular taxis, although you will always have to pay in cash and the cars may not be as nice as Uber.

Lima has public transportation, but it is not easy to figure out.  By law, wheelchair users can ride the bus for free, but we never saw even one accessible bus.

While Laura Lea worked, Robert took the Mirabus City Tour.  These were double-decker buses, and because Robert had to ride on the bottom, his view was obscured as the windows had advertisements.  Also, the English tours seemed to be MUCH shorter than the Spanish ones.

Accessibility on the bus and on the tour was good.  He was able to get on and off of the buses and in most of the locations, although not all.  Given that some of the buildings were hundreds of years old, this is to be expected.  They often pulled out temporary ramps so that he was able to participate in most of the tours.

We had the good fortune to attend a futbol (soccer) game while in Lima.  Tickets must be purchased through Teleticket, which can be found in some grocery stores.  This is kind of nice as you talk to a person when you buy the tickets, and can make sure that you get seats in the wheelchair section.  However, the reality is that there really isn’t a wheelchair section.  The game we went to was only about 25% capacity, and we wound up with an entire section to ourselves, but Robert had to sit in the aisle.  Had it been a big game with a full stadium, there would likely have been some difficulties.

Peru has come a long way in the last seven years with respect to accessibility but has a ways to go.  There are wheelchair parking spaces all over the place, but we couldn’t figure out who got to park in those spaces.  We asked a policeman, and he said that there were no placards or anything so it was very difficult to enforce.  One cool thing we saw was a message on a parking space that said, in large letters, “Don’t park in my space; put yourself in my place.”