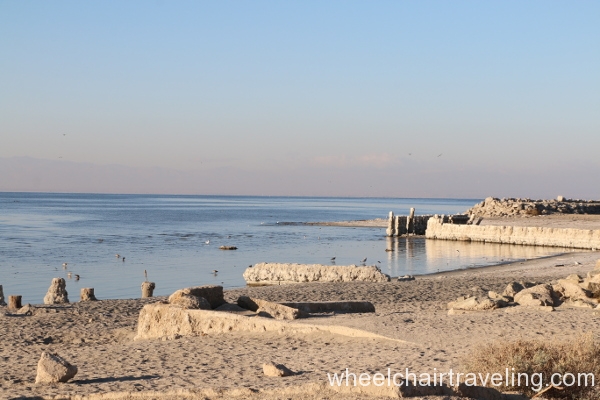 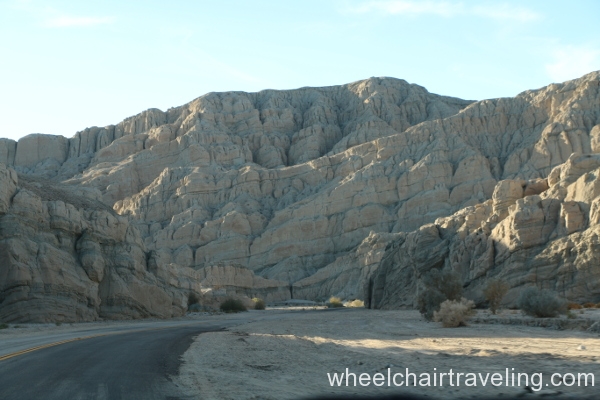 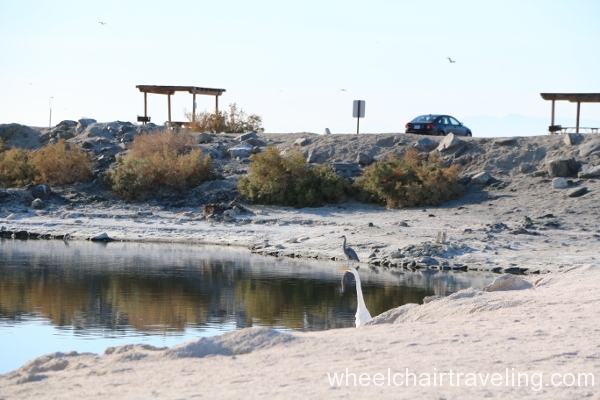 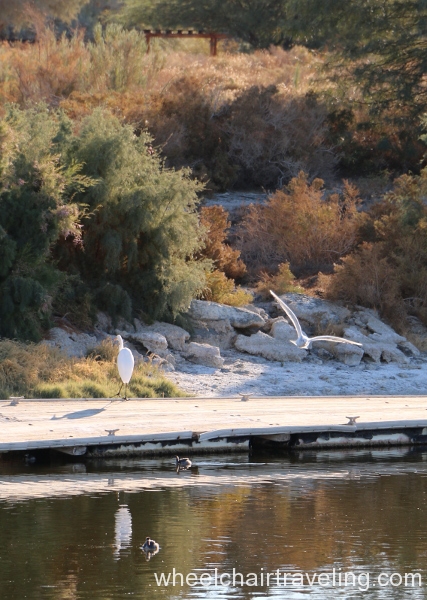 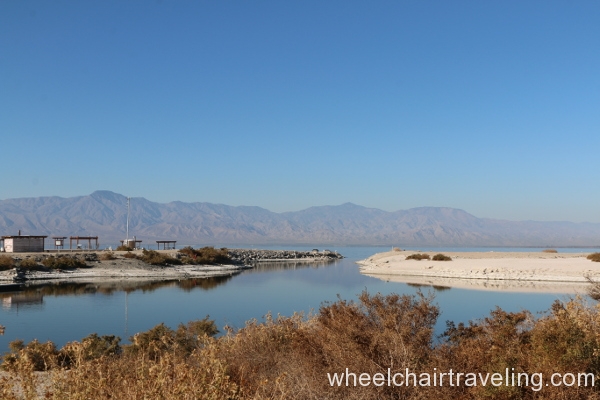 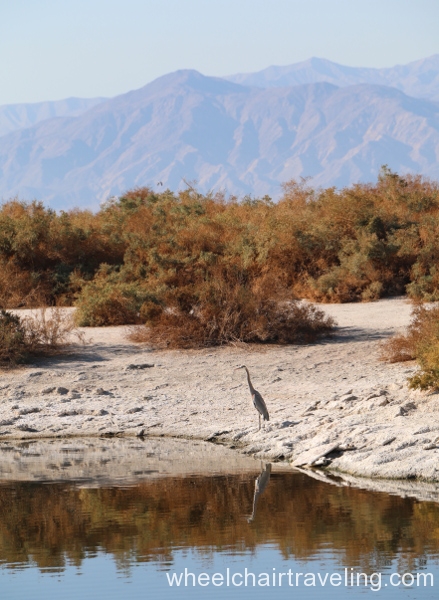 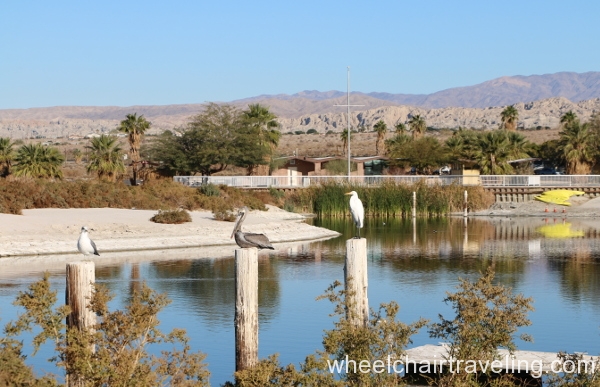 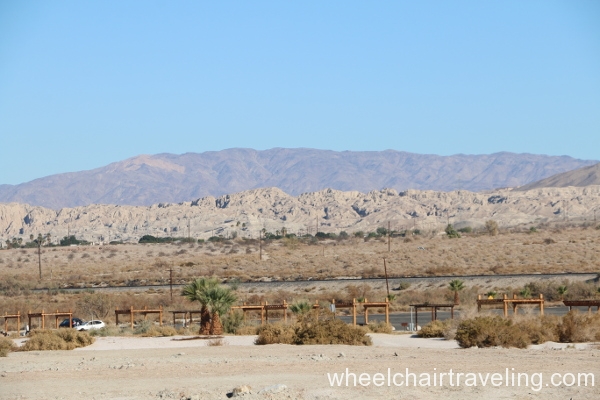 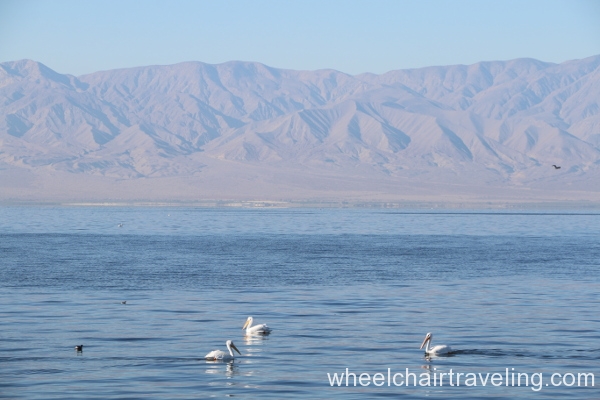 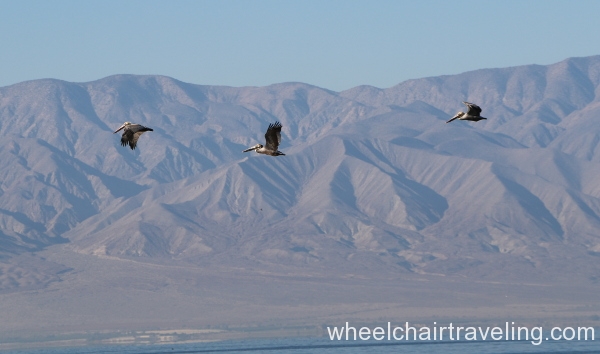 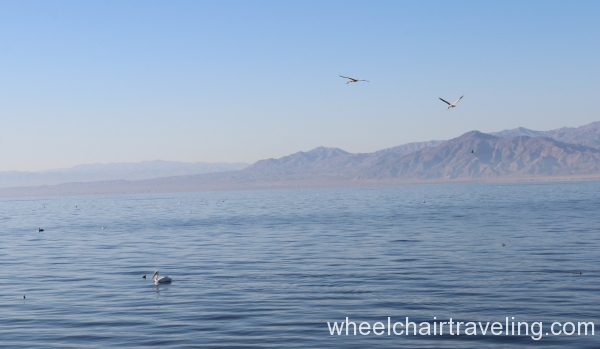 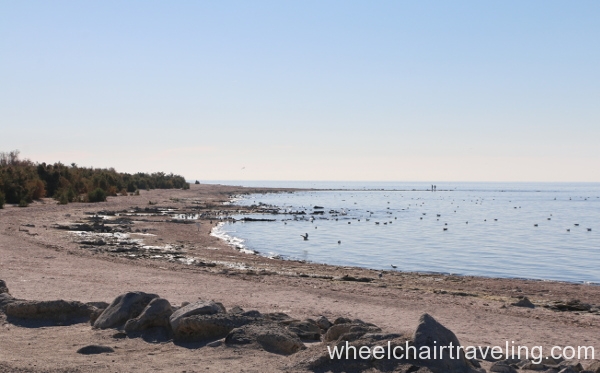 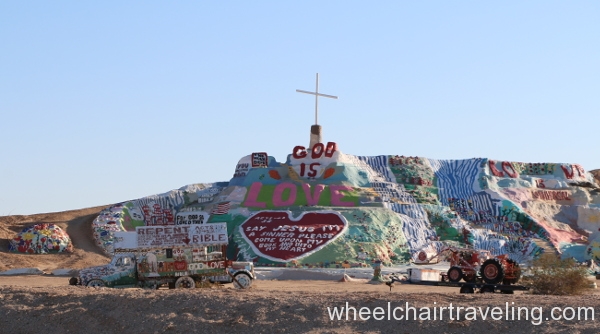 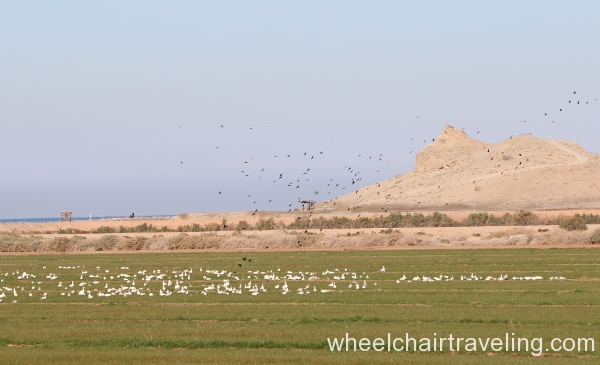 The Salton Sea in Southern California is a fascinating place with a tragic history. This hauntingly beautiful body of salt water is the largest lake in California, occupying an area approximately 15 miles wide by 35 miles long between the Coachella Valley and the Imperial Valley. The northern end of the lake is surrounded by mountains, but the basin that holds its water is almost as low as Death Valley at 234 ft. below sea level. Salton Sea was formed in 1905 when flooding Colorado River waters broke through a man-made irrigation canal system and poured into this large basin for 16 months.

By the 1950s, the resulting “sea” had developed into a popular resort area for water recreation. In the 1970s a series of damaging hurricanes flooded some communities, particularly at Bombay Beach where a portion of the town is still submerged and ruins remain on the shoreline. The salinity of the water is gradually increasing due to the high evaporation rate in the desert as there is very little freshwater inflow – it’s now about 40% saltier than the ocean! The lake shores are flanked by produce farms to the north and south/southeast, so some agricultural run-off makes its way into the water as well.

It’s best to visit during the cooler months of the year (October-May). Migrating birds congregate at Salton Sea by the thousands from November to May, making it very popular with bird watchers. Extreme summer temperatures encourage algae bloom, which consumes some of the oxygen in the water. When the salt levels escalate and oxygen levels drop, the habitat can become inhospitable to the millions of fish who make their home in the water, occasionally causing them to perish in large numbers. In spite of this occasional calamity, the water is clean and safe for fishing, wading and boating.

How to Get Here

An excursion to the Salton Sea makes an interesting addition to your itinerary if you are in the area to visit Palm Springs or Joshua Tree National Park. It’s located about an hour southeast of Palm Springs via Interstate 10 and Rt. 86. Or, from the south entrance of Joshua Tree National Park (I-10 exit 168), you can take scenic route 195 “Box Canyon Road” south for about 30 miles to join Rt. 111 at Mecca.

If you are traveling Interstate 8 between San Diego and Yuma, you can take Rt. 86 or Rt. 111 north from El Centro. Keep in mind that the Salton Sea is in a somewhat remote desert area. There are several small towns along its shoreline but services may be limited. There isn’t a large selection of hotels and restaurants; expect small family-run establishments, not national chains. It’s probably a good idea to fill your car with gas before you go, as stations are spread out and likely to be more expensive. A full range of services is available nearby in the larger Coachella Valley cities of Indio, Palm Desert and Palm Springs.

There are many points of interest around Salton Sea and in the surrounding area. It’s especially lovely at sunrise and sunset. You can spend a couple of hours at the shore enjoying the view and watching the birds, or take an entire day to drive the circumference of the lake on routes 111 and 86 (approximately 120 miles). If you only have time for one stop, then I recommend the Salton Sea State Recreation Area on Rt. 111 on the northeast side of the lake as the best choice for accessibility. The scenery there is beautiful and waterfowl are plentiful. A visitor center (10am-4pm, Fri.-Sun. only in summer, daily the rest of the year) offers helpful rangers, educational exhibits, a 10-minute video that explains the history of the sea, and a small gift shop.

The park maintains several beach areas along the east side of the lake for swimming/wading, but the surface texture is coarse barnacle shells and pebbles, not fine sand. There are covered picnic areas with barbecue grills, a shallow marina with boat ramp, campgrounds, a playground, paved paths and a camp store. A beach wheelchair is available for loan at the visitor center. Accessible features include parking, restrooms, picnic areas, campsites (#37 and #45), showers, and trails. Wheelchairs can get within a few feet of the water’s edge. There’s a small day-use fee, camping is additional. Keep in mind that there isn’t a lot of shade here, so bring a hat, sunglasses, sunscreen and plenty of drinking water.

If you want to explore the Salton Sea area further, there are several beaches and marinas; at Salton City, Desert Shores, and North Shore. At the Oasis Date Gardens on Rt. 111 at Thermal you can learn how dates are cultivated and taste some foods made with dates in their cafe’. The International Banana Museum on Rt. 111 near North Shore boasts the world’s largest collection devoted to one fruit and world-famous banana shakes. Stop by Niland and marvel at Leonard Knight’s Salvation Mountain and other avant-garde artistic creations built by the residents of Slab City.

Bird and Wildlife viewing is popular at the Sonny Bono National Wildlife Refuge on the south end of the sea near Niland and Brawley. The refuge has a large wooden ramp to a two-story viewing platform with binocular scopes. There is also accessible parking, restrooms, a picnic area and a small visitor center. A soft-surface trail leads about 1 mile to the lake shore; it may be usable by some wheelchairs when weather has been dry (assistance may be required). Whatever you decide to do at Salton Sea, you’re bound to find something unique that you can’t see anywhere else.