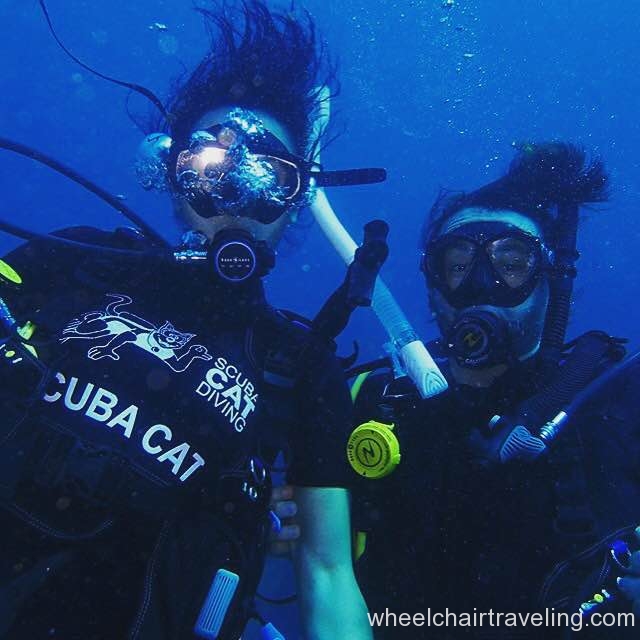 I am a T2 paraplegic and I travelled through Thailand for two weeks in a manual chair with my boyfriend, who is not in a wheelchair.

With its amazing cultural and geographical diversity, I discovered that there are limitless ways to experience Thailand. For wheelchair users however, this is not yet the easiest of countries to travel in despite the tourism industry explosion over the last decade. Nonetheless, with some advanced planning an enjoyable and exciting adventure is definitely possible. Good news is that accessibility is greatly improving in tourism hotspots although many parts of the country are still rural or developing.

I have only been using a wheelchair for a little over a year, so my boyfriend helped with common obstacles like sidewalks without curb cuts. A more veteran wheelchair user might be able to manage independently, but having a travel companion to help you out makes life a lot easier. The friendly and helpful reputation of Thai people is certainly true and everywhere we went people were more than willing to lend a hand. Accessible Thailand offered some accessibility information on Thailand as well.

Travel Basics: Seasons, Getting Around + Bathrooms

I traveled in December and January, which are the first months of the dry season as well as peak tourist season (rainy season is typically July to early November). Fortunately, this meant that temperatures ranged from 75-90℉ or 24-32℃ and that I was delightfully warm all the time. Unfortunately, this also meant that hotel prices were higher and that it was difficult to escape hordes of tourists in popular destinations so make reservations in advance!

Even with all the tourists English is not a widely spoken language so having your hotels and destinations written out with their respective phone numbers will be very helpful. We learned the hard way that Thai people don’t use addresses or even maps to navigate so cab drivers will usually ask for the phone number of your destination if they don’t recognize the name of the place.

Flying is the fastest and most accessible way to travel domestically. There are multiple daily flights to chose from for any domestic destination. You can also travel by train or bus but those are reportedly not accessible. AirAsia and NokAir are the cheapest though Thai Airways was also convenient to fly. AirAsia did not have an aisle chair so I needed to be carried on board but airlines allow wheelchair users to use the express check-in line for monks. An attendant always accompanied us to the plane.

One thing to note is that Thailand does not have much of a pedestrian culture. Most people use motorbikes to get around and sidewalks are generally not in the best of conditions. Either they lack curb cuts, have planters or motorbikes that block the entire sidewalk, or are in disrepair. Best way to get around are taxis or local public transportation. I did use Uber a number of times while I was there and happy with the service, though I did use regular, non-adapted cars.

Doorways, especially in public bathrooms tend to be narrow. In older buildings public restrooms were usually inaccessible. I found that using a leg bag during my trip was the easiest solution to this. In modern buildings such as airports or malls there were special handicap bathrooms that were unlocked for me by an attendant. Though the level of accessibility is not consistent, I usually found that people tried their best to accommodate me.

We began our journey in Chiang Mai, the second largest city in Thailand and the cultural capital of the north. The northern part of the country is well-known for its breathtaking jungled mountain landscapes, multi-ethnic tribes, and food. Centuries ago Chiang Mai was a cultural crossroad for the Thai, Burmese, Laos and Chinese merchants. Today it is a small relaxed city with an interesting combination of being a modern university town with an old city with dozens of temples and buildings formerly used by royalty.

The primary mode of public transportation are red cars, which are converted pickup trucks with benches and bed roofs. You wave them down and you tell them where you want to go. If they are carrying other passengers they will take you if you are headed in the same direction. If not then they operate like a taxi. With the help of the driver I was able to get into the red cars and fit my chair with some room to spare. Otherwise, taxis are an option although they cost more and are scarce during high tourist season. I stayed in an AirBnb but I went to a nearby hotel and asked the concierge to hire a taxi for half a day to take us to all the temples. This costed 1200 baht or approximately $33.

We flew from Chiang Mai to Phuket airport and took a car about 60km north to a town in the Phang Nga province called Khao Lak. You can arrange transportation from the airport through your hotel but I used Cheaper Than Hotel Car Service, which was reliable and slightly less expensive (about 1000 bht to get from the airport to Khao Lak).

Right on the ocean Khao Lak has an abundance of nice resorts on the water. I stayed at Ocean Breeze Resort, which was relatively accessible. Most hotels aren’t fully equipped to be accessible so be ready for improvised solutions. For example, they found a plastic chair and put it in the shower for me since there wasn’t a shower chair. I wasn’t able to find a beach chair either so I relaxed on a reclining chair on the sand. If you are there check out White Sand Beach, a beautiful public beach with pristine white sand and bright blue water though again, no beach chairs.

Most tourists rent motorbikes for very cheap to get around. We rented one and using my chest and leg straps, I was able to strap my feet to the pedals and my torso to my boyfriend. This wasn’t the most comfortable way to travel, not to mention I had to leave my chair behind but it was a fun way to get some wind in my hair. Just remember Thai people drive on the other side of the road.

After two days in Khao Lak we took a taxi 2 hours down to Phuket, a large island crowded with beach resorts and tourists looking to dive, enjoy the beaches, or party. This wouldn’t be the place to have an authentic Thai experience but we went to scuba dive. I highly recommend Scuba Cat if you want to go snorkeling or diving. After calling and emailing countless places, this is one of the few diving centers in Phuket that would take a non-certified wheelchair user. Our instructor, Claus, has extensive experience training disabled divers and was extremely attentive throughout our entire diving trip. Though the boat was not very accessible the whole crew made sure I was comfortable and safe. From Phuket it is easy to catch a ferry to the surrounding islands, though the islands vary in the amount of accessible infrastructure.

Bangkok is the hectic capital of Thailand. We stayed at a new condo apartment through AirBnb for $20 a night. If you go this route make sure to check with your host and ask specific questions about the accessibility of their apartment. Even after sending an extensive list of questions one of my hosts forgot to mention the short flight of stairs into the building. Bangkok is a rapidly modernizing city so there are plenty of accessible new condos and mega malls (usually with great food courts).

Walking on the streets is virtually impossible for wheelchair users though there is an abundance of taxis and tuk tuks (which surprisingly fit me, my boyfriend, and my deconstructed wheelchair). Make sure you ask the driver to start the meter at the beginning of your ride or agree on a price, if not you may get stuck with an inflated tourist price. The metro system, which is comprised of the MRT light-rail, BTS sky-rail, and the ARL airport rail, is a convenient way to get around. Not all stations have elevators but those that do are really easy to access. Here is a list of BTS stations with elevators: Chong Nonsi, Siam, Mo Chit, Asok, On Nut, Krung Thon Buri,  Wongwian Yai, Pho Nimit,Talat Phlu, Wutthakat and Bang Wa Station. The ARL is easy to use to get from the airport into the central part of the city.

Carina sustained a T2 complete spinal cord injury after a car accident when she was 26. Since then she has continued to pursue her love of travel and making music. She is currently an apprentice dancer at Axis Dance in Oakland, CA. She has a personal blog about her life and travels www.rollwithbigresults.com. She is also embarking on a solo music project www.onwardhomusic.com.