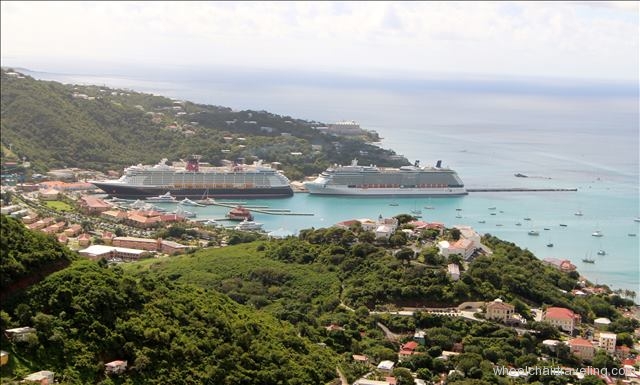 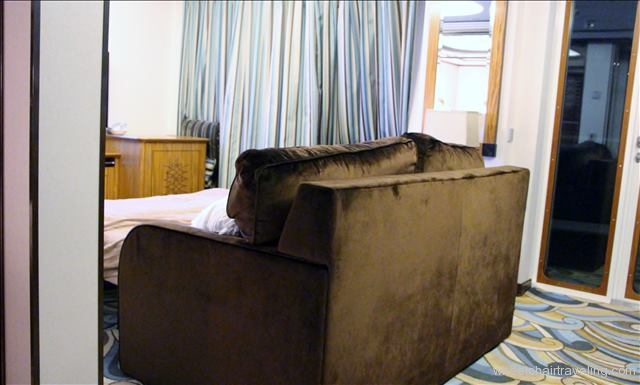 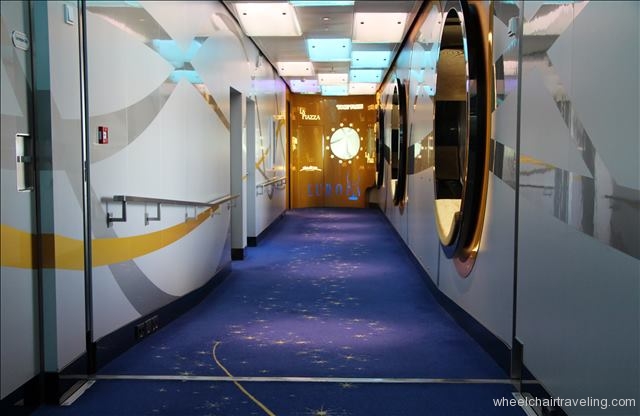 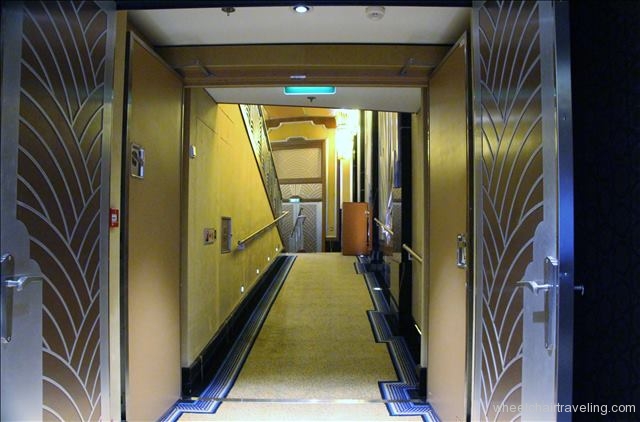 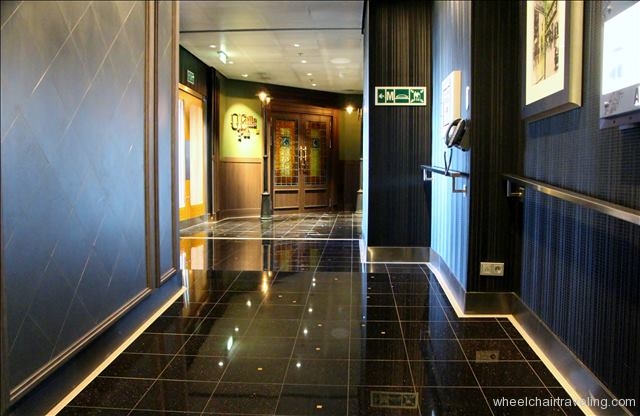 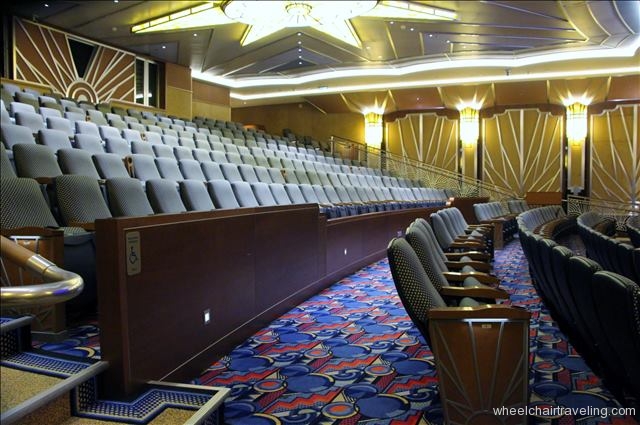 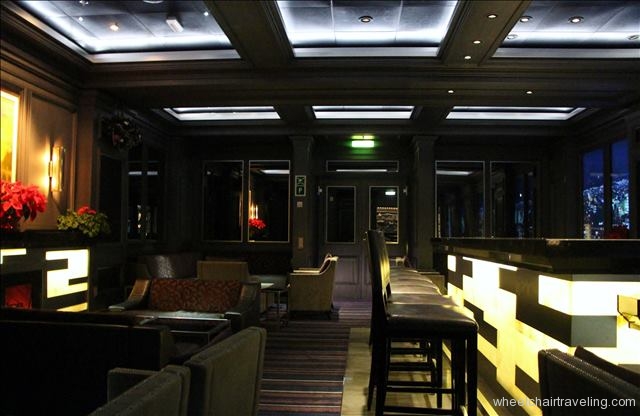 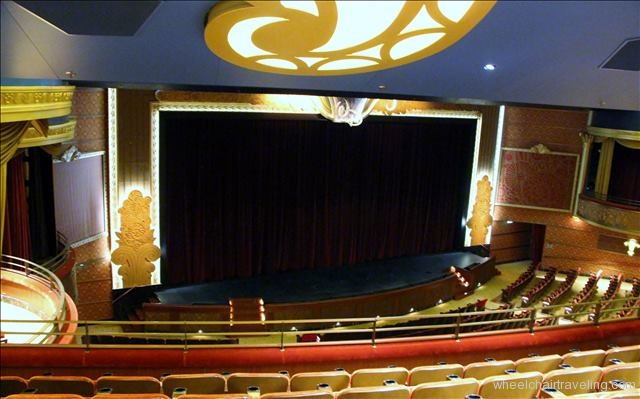 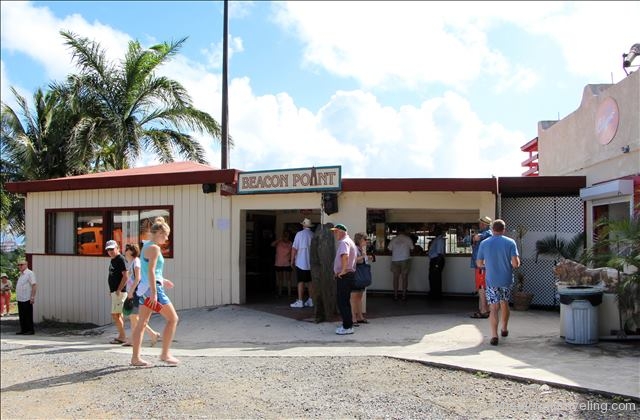 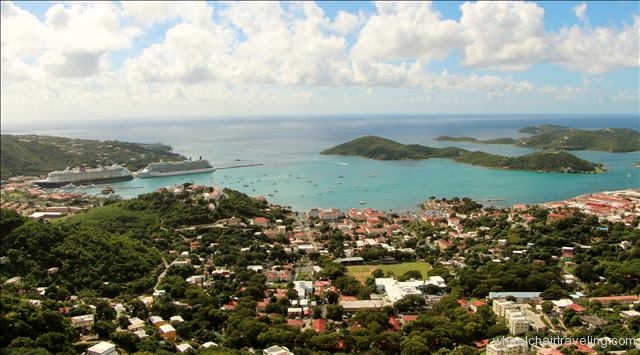 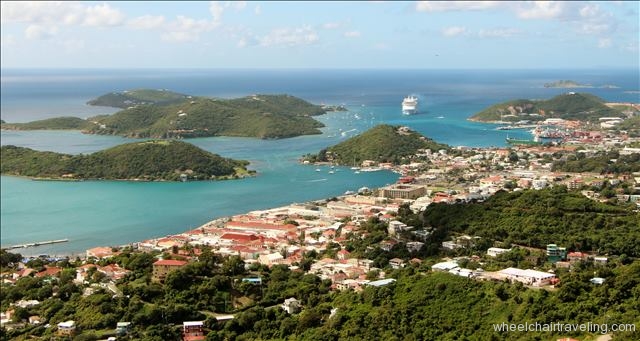 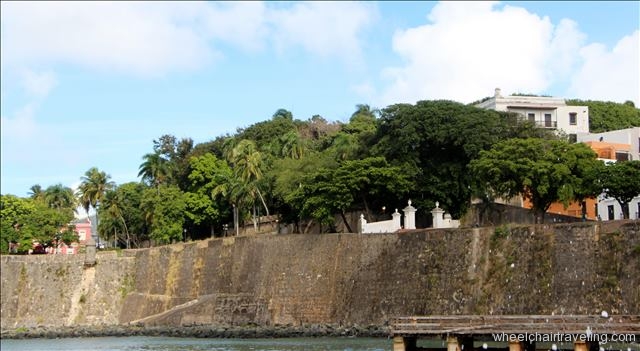 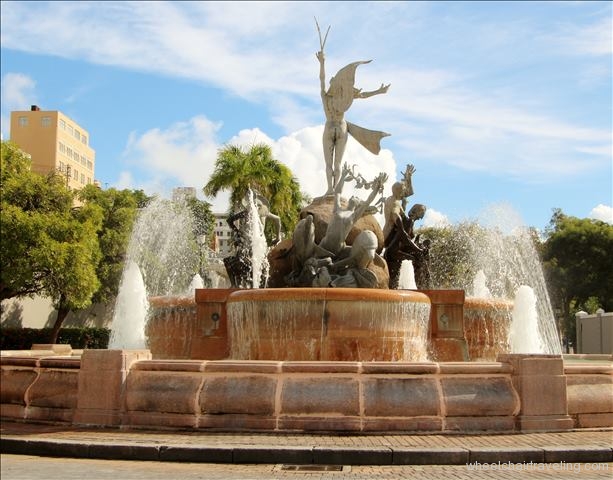 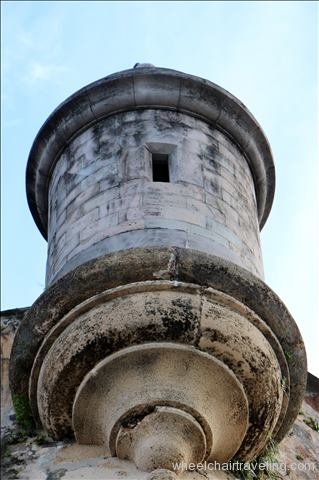 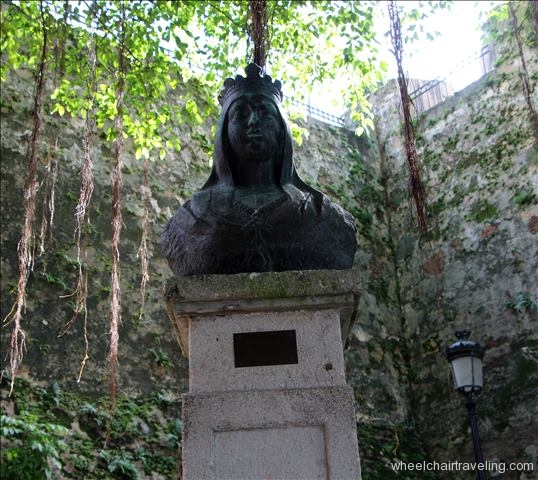 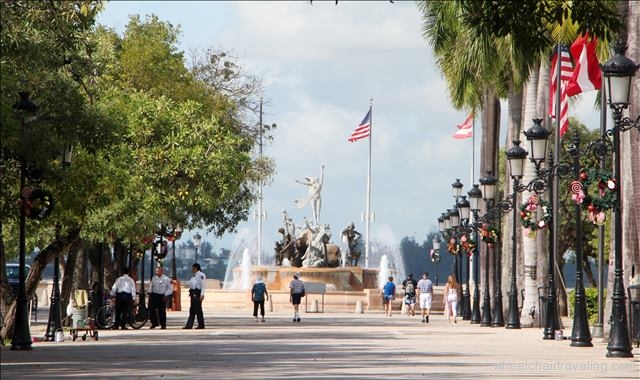 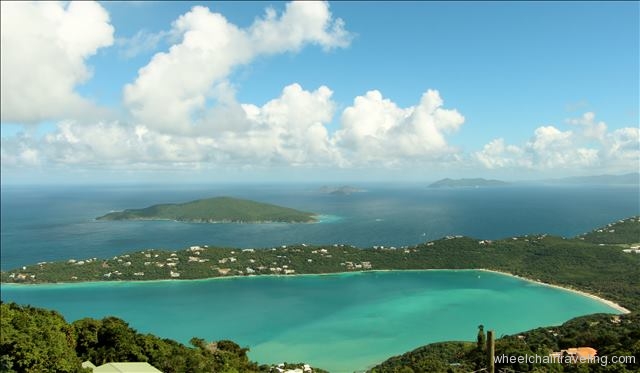 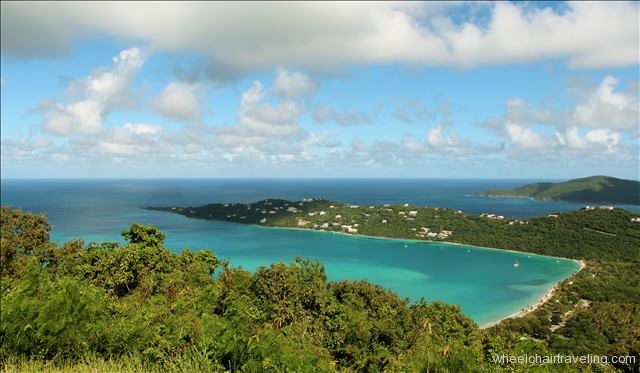 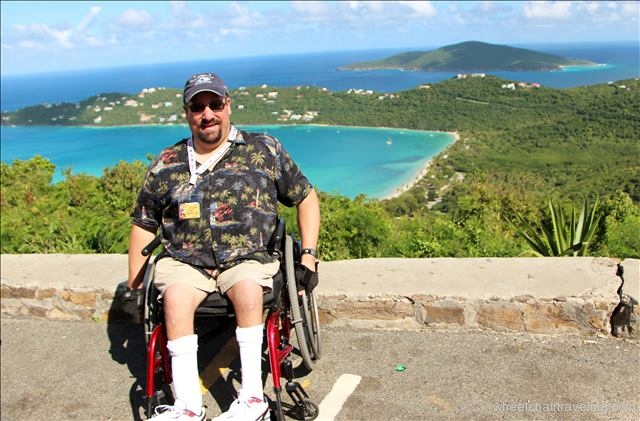 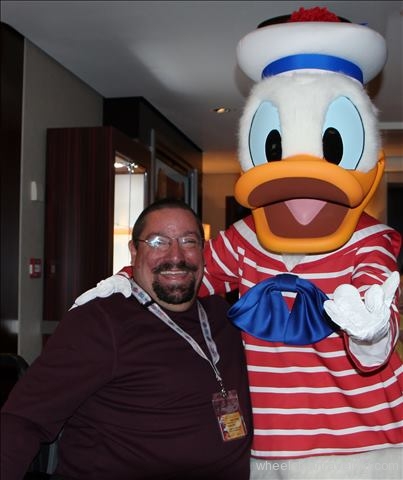 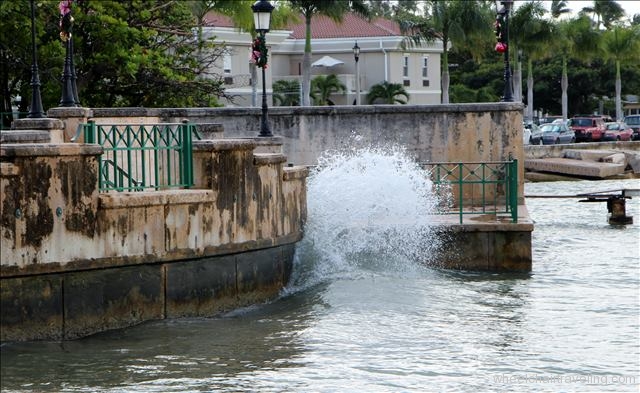 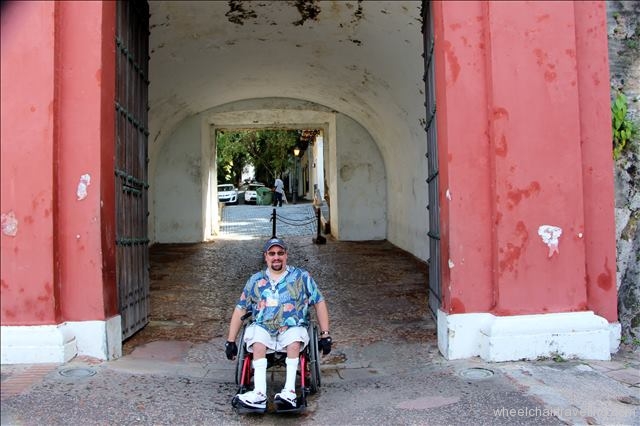 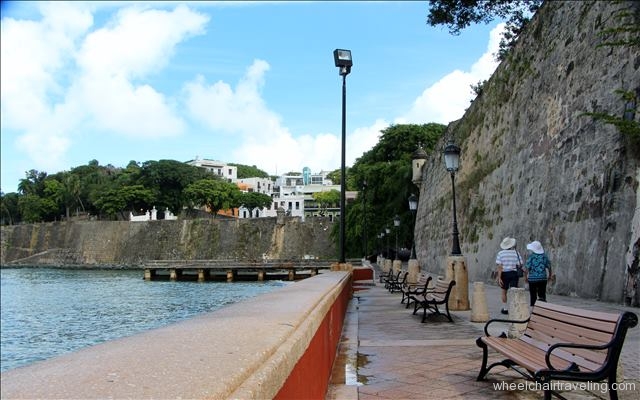 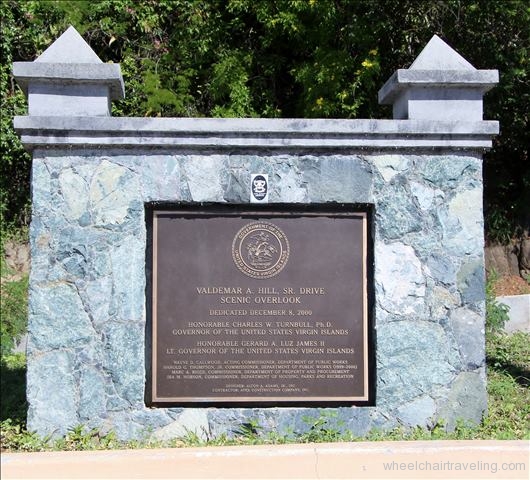 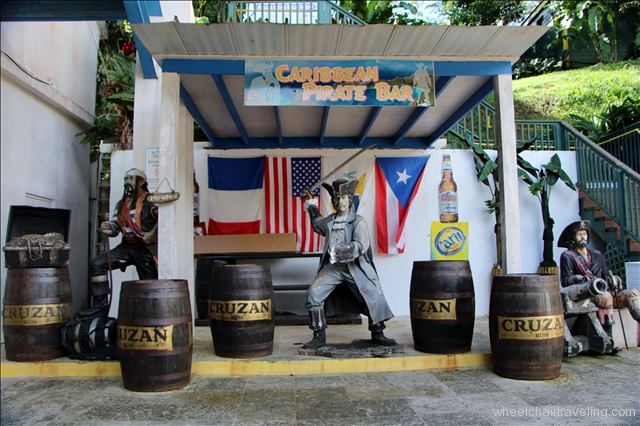 I have been on many great Disney Cruises, but the access on the 7-day Eastern Caribbean Cruise onboard the Disney Fantasy was a huge disappointment. In November 2014, our itinerary included stops in St. Thomas, San Juan and Castaway Cay.  My plans for this cruise were to test the accessibility of the ship and the embarkation / disembarkation process at the various ports of call.

For our cruise on the Fantasy we booked an Accessible 1-bedroom Concierge Family Stateroom with Verandah and I had high expectations as my previous Disney cruise was in the same type room, only it wasn’t listed as accessible but had every accessible feature you would expect to find including plenty of space.  Upon entering our stateroom and looking around, we noticed a couch was blocking the entrance to the living room and what appeared to be my bed for this cruise, stowed in the wall that when extended would provide no room for my wheelchair to maneuver around.

Trying not to worry about it, I explored the rest of the stateroom which included a fully accessible bathroom with roll-up shower, another smaller non-accessible half-bathroom and probably the largest fully accessible balcony I have had while on a cruise.  After we had dinner and returned for the evening we noticed the couch was actually a couch-bed and where I would sleep during our cruise.  With the couch blocking any entrance into the living room itself, the only way I could get into and out of bed each day was to crawl along the floor between the wall and the couch, which for anyone who doesn’t have any mobility would be an impossible experience.  I however wasn’t about to let this ruin my vacation.

The Disney Fantasy has been a ship I’ve wanted to sail on since cruising on the Magic.  I had heard many wonderful things about it and being a Disney nut, well, it was just something I had to do.  Overall, the ship itself did not disappoint.  Public areas, lounges and dining venues had plenty of space for my wheelchair.  The Staff & Crew were very friendly and willing to help.  Doors to the outside decks are automated, elevators are plentiful and I noticed lifts around a couple of the pools.  The lone issue I had with the ship was the inclines in the hallways around the entertainment venues and lounges.  Although the inclines aren’t very steep, I found them challenging in some places because of the carpeting.  Again, another obstacle I wasn’t going to let ruin my cruise.

St. Thomas and San Juan are two of the most visited ports in the Caribbean and a couple that have been at the top of my list for some time.  Unfortunately, my visits to these ports didn’t go without accessibility issues in regards to the ship gangways. Having been on four cruises previously I wasn’t a stranger to steep gangways due to tidal conditions or other factors.  On three of those cruises, it had been my experience the Ships Security Team was more than willing to provide me with assistance up and down the gangways.

Upon arrival in St. Thomas and San Juan the gangway was steeper than I had previously experienced outside of my Alaskan cruise and the Disney Fantasy Security Team proved less than cooperative in providing assistance.  After asking several times, the assistance I was finally given was just as confusing and uncoordinated as the looks they had on their faces when I had originally asked for it.  This experience along with my previous Disney Cruise are the only times I have felt unsafe while “in the hands” of a Ships Security Team.  Yet, I was determined to enjoy two ports I had wanted to visit for so long.

For our cruise the Disney Fantasy berthed at the West Indian Company Dock or Havensight on the outskirts of Charlotte Amalie, the largest city and Capital of the U.S. Virgin Islands.  The port area itself offers some great shopping and dining opportunities but my thoughts were toward seeing this magnificent island.  We flagged down a taxi van to drive us around for a couple hours on a private tour of the island.

We first went to Beacon Point on the West Side of St. Thomas.  Here we were able to sample a local banana margarita that tasted very similar to banana bread and provide me with my first of many gorgeous views of St. Thomas.  Our next stop at Scenic Overlook for years has provided travel companies, photographers with one of the most recognized and photographed views in the World as you look down onto downtown Charlotte Amalie, Blackbeard and Bluebeards Castles and the beautiful Bays that mark the entrance into the St. Thomas ports at Havensight and Crown Bay.

Our third stop was to a point just above the famous Magens Bay that offered majestic views of the Bay itself and views of several neighboring islands to include St. John and St. Croix.  The fourth and final stop on our tour was to the World Famous Mountain Top on St. Peter Mountain, the highest point in St. Thomas.  Here we saw more magnificent views of Magens Bay and the neighboring islands.  With our tour finished I was happy having seen every location on St. Thomas that I had in mind.

Our original plan for San Juan was to tour the Bacardi Rum Distillery which was listed as an accessible tour.  However, early on in the cruise I was informed transportation would not be accessible and we opted out of it.  This left us with limited options on what to do because the port for San Juan is in Old San Juan which presents a challenging environment to those with mobility disabilities due to the vast uneven and cobblestone roads and sidewalks.

We discussed what to do and my parents felt they could help me navigate enough to see one of the Forts that surround Old San Juan.  After disembarking the Fantasy we navigated along the cobblestone streets and sidewalks of Old San Juan looking at what the local vendors had to offer making our way to the Fort.  The effort getting to/from the Fort wasn’t extreme but did prove challenging in some areas due to the lack of sidewalk ramps and uneven cobblestones.  In the end I was able to see part of the Fort, witness some great ocean wave action along the way but very happy I had my parents with me to help navigate.

At the end of our cruise frustration with the accessibility issues had taken their toll on me.  I couldn’t understand why Disney Cruise Line, a company owned by The Walt Disney Company itself, could be so lacking with Accessibility when the Parks, which I have visited a dozen or more times, provided me with barrier-free experiences.  I knew I had to voice my concerns and write to the President of Disney Cruise Line and their Accessibility Department.  As is the goal with so many others, all I want is equal opportunities, fair treatment and the ability for me and those after me to travel the World as barrier-free as possible.  When I first returned from the cruise I was dead-set on never cruising Disney again.  However, after having some time to “cool-off” perhaps down the road if I found out about changes to policies and experiences I may try them again.

Born with Spina Bifida, Mike OKray, is from Dallas, TX and feels there isn't anything in life that he can't do. Mike has spent his entire life proving disbelievers wrong. Throughout life Mike has learned to ride horses, fly single-engine airplanes, play organized athletics and now work for one of the largest airlines in the United States, which has only fueled his love for aviation and travel.