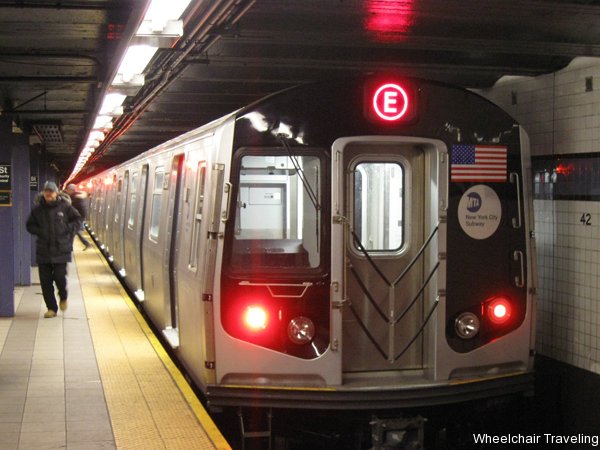 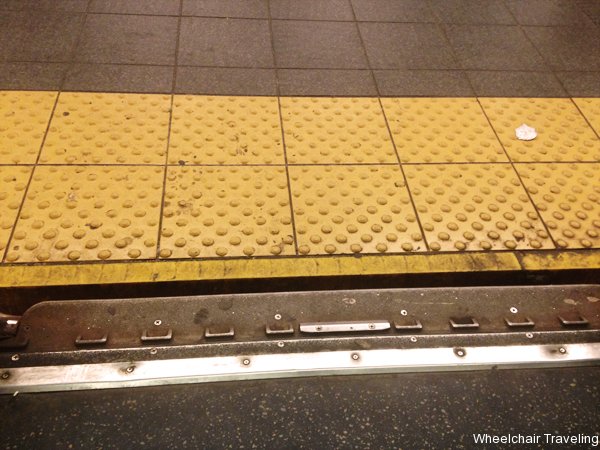 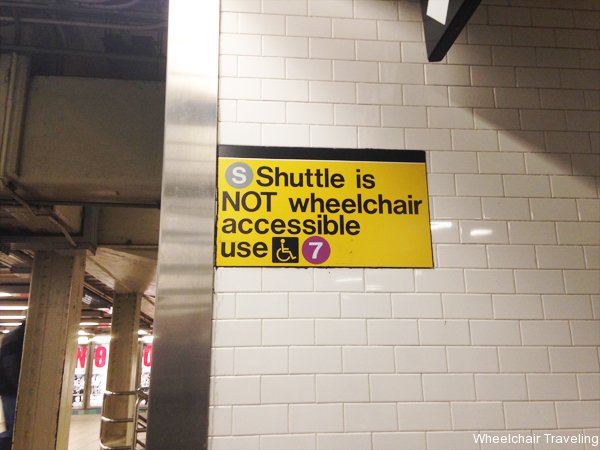 Though I’ve been a New Yorker all my life, I grew up feeling quite uneasy and hesitant about venturing into New York City. Yes, I know it’s shocking, but not all New Yorkers are city residents! I live in a big but relatively quiet suburb of Long Island, and because I use a wheelchair, my only convenient mode of transportation for several years was the backseat of a vehicle. In fact, I experienced airplane trips and boat rides before ever taking a train to the city next door. I had been driven into the city for various events and doctor appointments, but it wasn’t until my first year of college that I dared to venture into NYC on my own via train.

I’m glad I did. It opened up a whole new world of adventures…so long as I wanted to stay within wheeling distance of the accessible Penn Station exit I like to use on 34th Street and 7th Avenue. After a while, I realized that there’s so much more to be seen and so much to do in NYC. So, in order to traverse the city, I had to be bold and take on the subway system, which I used to avoid like the plague. To be honest, using the subway can be quite challenging because it’s not the most wheelchair friendly method of transportation.

“By planning ahead and being prepared, the subway system is an awesome way for people who use wheelchairs to expand opportunities for adventure in New York City. And in a city full of excitement and rich culture, you won’t want to miss a thing!” – Emily Ladau

In some ways, I can understand why the subway isn’t particularly easily accessible. It was developed in the very early 1900s when accessibility wasn’t on the forefront of everyone’s minds. As legislation and social consciousness surrounding disability has improved in the 21st century, the NYC subway system is still lagging behind in many ways. That being said, now that I’ve got some adventures (and, unfortunately, misadventures) with the subway under my belt, I’ve got some insight for visitors who use wheelchairs to get around successfully on the subway.

The first and most important lesson I learned about navigating the subway when you’re unfamiliar with it is to research ahead of time. I must confess that I learned this the hard way. When I braved the subway the first couple of times, I was with friends who have a good sense of direction and knowledge of how the subway works, so I was able to rely on them. However, the first time I attempted to use the subway with a group of friends who were as unsure as I was, our plans for the day were completely foiled. We were supposed to see a play but forgot to double-check directions, so we asked a policeman outside the subway for assistance. He gave us directions that involved three different steps including a transfer to a shuttle, and though we were hesitant, we assumed the policeman knew what he was talking about. When we tried to follow the directions we were given, we made it as far as the shuttle only to discover a huge sign announcing that the shuttle is not wheelchair accessible. In the end, the policeman’s unusable directions caused us to miss the play, but we can’t totally blame him.

It’s frustrating that the policeman lacked a basic knowledge of NYC transportation accessibility, but it reminded me of why it is necessary to always verify how to get places beforehand. This is especially important because not every subway stop is accessible or has an elevator. The Metropolitan Transit Authority (MTA) website provides a list of accessible stations. Plus, you’ll want visit the website to make sure the elevators at the stations you need are in working order. I cannot stress enough how crucial it is to use these resources before you venture into the city, because it can make all the difference between a smooth trip or scrambling to alternate your route and plans.

If you or a family member or friend uses a wheelchair, don’t let any of this intimidate you or prevent you from using the subway, because I promise a little forethought goes a long way. It’s worth it for the amazing possibilities that will be opened to you. And once you do your research, you’ll be well on your way. Of course, in order to successfully conquer the subway, there are a few things you can do to strategize and make it easier to get on and off the train cars.

Getting On and Off the Subway Car

First of all, there will always be a gap between the train and the platform. The size of the gap varies from station to station, but it’s always there. Keep this in mind, because especially when the subways are at their peak usage time, you don’t want to risk getting front caster wheels caught in the gap. (Trust me, I speak from multiple experiences.) If you use a manual wheelchair, I recommend tipping back a bit to get your wheels over the gap. I should note that this doesn’t work for me in my power wheelchair, so I have to be more careful in maneuvering. While this trick is unfortunately not fail proof, I recommend putting your chair on full speed if you can, and gunning it straight forward to get over the gap. Second, while still minding the gap, don’t forget to move quickly because sometimes, the doors open and close in a minute or less.

Third, and perhaps most important, don’t be afraid to ask for assistance, particularly if you’re using the subway for the first time on your own. I’m a staunch advocate for independence, but since I definitely don’t want to get stuck in the gap or between the doors, sometimes I ask other subway patrons to lend a hand and help me get my heavy power wheelchair inside. The best thing to do when asking for help to ensure you get what you need is to show or explain to people exactly where to grab on to your chair to give you a lift.

Everyone else generally will get out of the way. Despite the stereotype that New Yorkers are rude, I assure you that’s absolutely not the case and people are generally happy to assist me. And, once you’re on the subway car, it’s important to know that there are no designated wheelchair areas. If it’s not too crowded, try to get over to the side and away from being in front of the doors. If it’s a peak time, you might have nowhere to move, so you’ll have to squeeze wherever you can fit. Remember, you have just as much of a right to take up space on the subway as everyone else!

Emily Ladau is a passionate disability rights advocate whose career began at the age of 10, when she appeared on several episodes of Sesame Street to educate children about her life with a physical disability. In the years that followed, Emily took on leadership roles in many advocacy initiatives. She graduated summa cum laude with a B.A. in English from Adelphi University. Immediately after graduation, Emily was selected to participate in the prestigious American Association of People with Disabilities internship program based in Washington, D.C. Since completing her internship in August 2013, Emily has been both employed and volunteering with multiple organizations to foster employment opportunities and develop resources for the disability community, as well as to encourage people with all types of disabilities to develop their inner voice for advocacy. Emily blogs at "Words I Wheel By" about her experiences as a disabled young adult, challenging people to consider all aspects of the disability experience in new ways.

The NYC Mayor’s Office on Accessibility has some great resources on Accessible New York (hotels, restaurants, activities). Their staff directed me to the Columbus Street Station because it supposedly has access to more accessible subway lines than anywhere else in the CIty. I don’t know about Penn Station, but they were right. We were able to get everywhere from Columbus Circle including Coney Island, Highline (with elevators to wheelchair accessible trail), SoHo and Broadway. Greatful for the sidewalk cafes. One restaurant had the most creative accessible bathroom – a sliding wall that looked like a piece of art until you… Read more »

Emily @ Words I Wheel By
Reply to  Susan Overson

Susan, I’m so glad to hear you had a successful NYC trip! And what a great tip about the resources from the Mayor’s office.

Thank you for this article. I will be visiting NYC for the first time this August and one of my biggest concerns is what a nightmare that I’ve heard/read that NYC public transportation is.

I live in Los Angeles and while it’s not perfect, it seems like this city might do better in that area. I don’t know if I will be taking any subways beyond the 7 train but my biggest concern is the gaps I read about. I’m hoping that it won’t be too bad.

Thank you again for sharing your advice.

Emily @ Words I Wheel By
Reply to  Katherine

Katherine, thanks for reading my article. I assure you that you’ll be able to manage the gaps. The worst that could happen is you may need to ask for a tad bit of assistance. But certainly don’t be nervous. There are so many adventures waiting to happen in the city and I’m so glad you’re visiting!

I just spent a day in downtown and midtown NYC. I was quite disturbed that the elevators at both stops that I was using were Out of Order. Mobility impaired people were literally crawling up and down the steps.

NYC should do better. It is best to take the bus.

I’ve only been using a wheelchair for about two years now, but knowing how frantic things can get on the subway after years of riding them, I commend your bravery. When I was still able to walk with canes, I switched to Access A Ride…it was too tiring to manage the stairs and my needed station didn’t have an elevator at that time. However, now that I have a power wheelchair, I may decide to try the railroad and subway again, given your experiences. Thank you.

How VERY kind of you to say! It’s 100% possible. Don’t forget to have patience for yourself and the system itself. Give yourself extra time to figure it all out because sometimes elevators break down or there’s other complications.