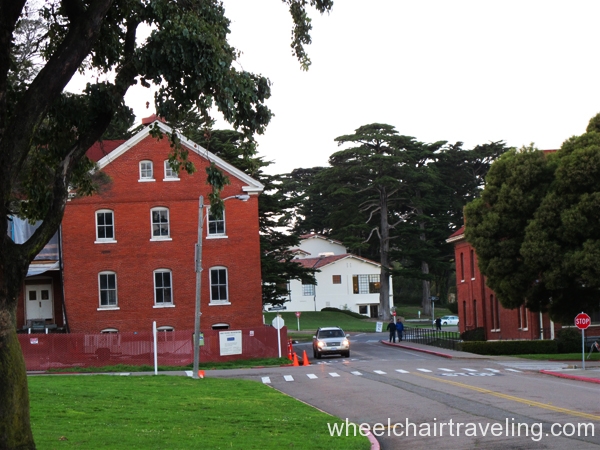 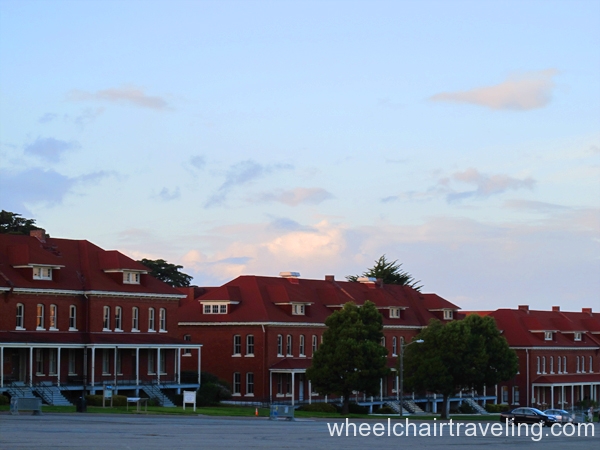 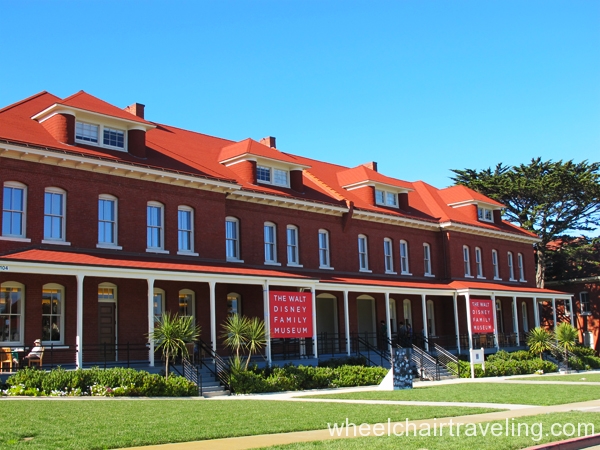 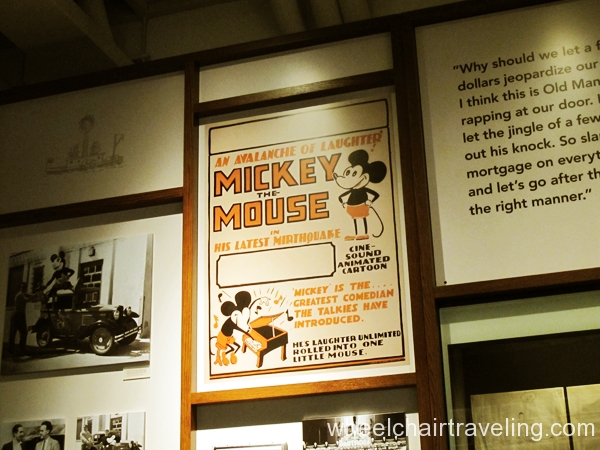 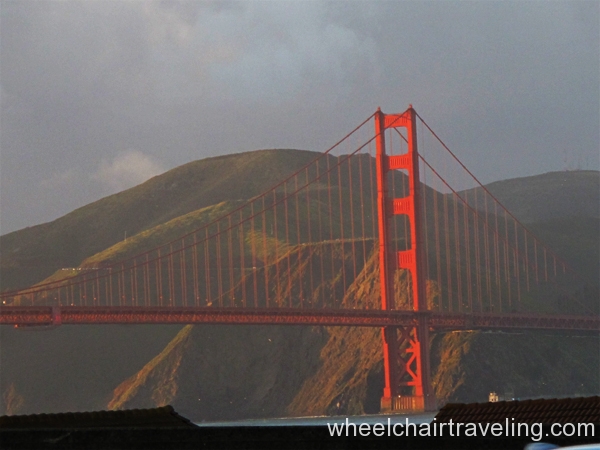 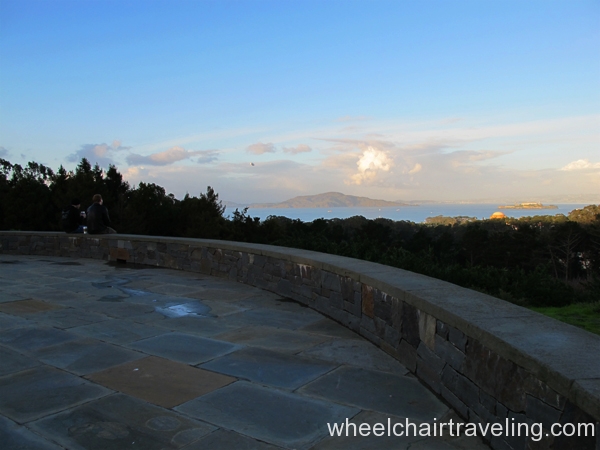 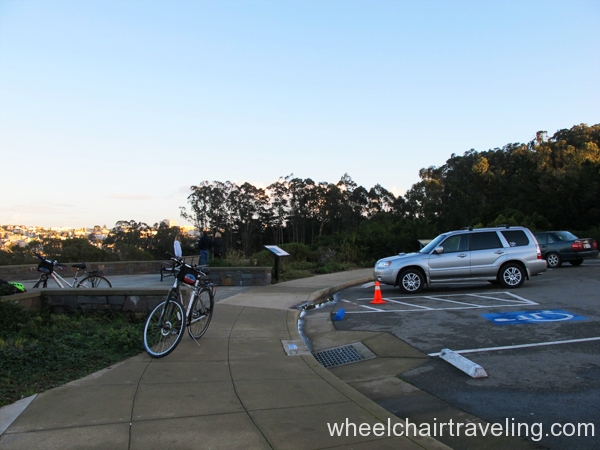 A U.S. Army post for nearly 150 years, San Francisco’s Presidio has been a national park since 1994 and a national historic landmark since 1962. Archaeological digs have uncovered remains from some of the city’s earliest structures here. More than 5 million people visit the Presidio every year to hike or bike its miles of trails or take in some of the many historic sites within the park’s 1,491 acres.

Two accessible trails run east-west through the northern section: the spectacular Golden Gate Promenade, a four-plus mile stretch of the Bay Trail that runs along the waterfront through Crissy Field’s restored marshland to Civil War-era Fort Point; and the Presidio Promenade (see trail description, below), which travels through the heart of the historic Presidio, from the Lombard Street gate past the Main Post and San Francisco National Cemetery to the Golden Gate Bridge. West of the bridge, a short stretch of Coastal Trail brings you to an overlook atop the Presidio’s rugged western bluffs; or you can visit Baker Beach and Battery Chamberlin, with its “disappearing” gun.

Description
The Presidio Promenade’s route follows both dedicated pathways and broad sidewalks, and is not always clearly signed; to find your way, it’s helpful to download the detailed Presidio map from the park’s website or stop by the visitor center to pick one up. Begin your trek along the Presidio Promenade just inside the park’s Lombard Street Gate, marked by two large stone pylons topped by globe lights.

The trail heads westward on the sidewalk along Lombard Street, then takes off on a broad asphalt path that winds through manicured lawns and groves of eucalyptus, pine, and palm trees. On your right is the Letterman Digital Arts Center; formerly the site of the Army’s Letterman Hospital, it now houses a Lucasfilm complex. Most of the buildings are off-limits to the public, but if you’re a fan of the Star Wars films you may want to detour to Building B to view the Yoda fountain in its courtyard and a small exhibit of Star Wars memorabilia in the lobby. Behind the complex, a mostly accessible landscaped park with a manmade lagoon and creek is also open to the public.

Back on the trail, follow the path to a broad sidewalk along Lincoln Boulevard. You soon come to Thompson’s Reach, where a portion of a former creek has been “daylighted” and native habitat restored. A short spur trail on your right leads down a moderate slope to an overlook with interpretive signs about the creek and its restoration. Return to the main trail, following the sidewalk west a short distance to the Main Post, the heart of the Presidio since 1776, when the original Spanish fort was established. If you’re interested in viewing the post’s historic buildings, stop at the temporary visitor center in Building 105 on Montgomery Street for information and maps. The Walt Disney Family Museum is near the visitor center.

On the Main Post, the Presidio Promenade follows the sidewalk past the transit center and post office, then, as you reach Montgomery Street, takes off on a broad multiuse path that winds behind the visitor center, following the route of the Presidio Parkway (formerly Doyle Drive). Here you have a panoramic view of the Golden Gate Strait, though unfortunately it is obstructed by the Parkway’s wire fencing.

You soon pass the San Francisco National Cemetery, established in 1884, where more than 30,000 military veterans and members of their families have been laid to rest. Just past the cemetery the promenade splits off from Lincoln Boulevard and descends a moderate slope to five brick cavalry stables built in 1914. One still houses U.S. Park Police horses, and you are likely to see some of them in one or both of the outdoor paddocks as you pass by. Behind one of the stables you cross a 55-foot wooden bridge, then begin a gentle climb up to travel along Lincoln Boulevard again.

Passing under Doyle Drive, with its massive stone supports and metalwork painted the same orange hue as the Golden Gate Bridge, you soon come to the Crissy Field Overlook. If it’s a clear day, pause here for a moment to take in the stunning views of the Golden Gate Strait, the San Francisco skyline, and the rolling green meadows of Crissy Field. From here to the Golden Gate Bridge Plaza, where the promenade ends, is about half a mile. This is a popular route for tourists and commuters bicycling over the bridge, so watch out for speeding bikes. Be sure to look for a pullout with interpretive signs and interactive exhibits about the bridge.

Accessibility Details
The facilities listed below meet all of our access criteria unless otherwise noted.

Alongside on the edge of a cliff at Inspiration Point you can see wide into the bay, including Balboa Park, Alcatraz, and Mt. Tam. San Francisco is one of the hilliest cities in the world with unbelievable views hidden all over the city. Many overlook some of the most famous landmarks in San Francisco.

Inside one of the red brick buildings in the Presidio of San Francisco with the Golden Gate Bridge as a backdrop is the Walt Disney Family Museum. The museum is about the man Walt Disney, his life and career which spans through ten permanent galleries in chronological order. The galleries are: Beginnings, Hollywood, New Horizons in the 1930’s, The Move to Features, “We Were in a New Business,” “The Toughest Period in my Whole Life,” Postwar Production, Walt + The Natural World, The 1950’s + 1960’s: The Big Screen and Beyond, December 15, 1966.

The museum display of Walt Disney’s life creations lives up to the imagination of Disney. Each gallery has a different look and feel, showing off original drawings, photos, the movies themselves and more. The climax of the tour is entering into The Big Screen and Beyond gallery where the path spirals around the room’s center piece which is the immaculate detailed replication of Disneyland and above it a glowing orb as a spotlight. At one point the tour wraps you around the backside of the museum where an incredible view of the Golden Gate Bridge can be seen through the all glass wall. About halfway through the museum there is a single stall wheelchair accessible restroom, which could be quite convenient.

On the lower level floor there is a state of the art digital movie theater. There are also restrooms on this floor. The lobby floor does not have restrooms, but the ticket counter, museum store and small café can be found. The café has a good selection of snacks as well as small meals, like Chinese Chicken Salad, chili or a Panini operated by Wolfgang Puck aimed to items made with healthy local ingredients.

Out of many museum topics, Disney may be one that many young children could appreciate; however, unfortunately there are no strollers allowed inside due space constraints but certainly wheelchairs are okay. Also, photography is prohibited in the museum but I risked a couple shots in order to give you a feel what to expect but they really don’t do the museum justice. Open every day from 10am to 6pm but Tuesdays, the Walt Disney Family Museum is a great place for the child within us all but for those who are avid Disney fans then this is an incredible shrine to the creative visionary, Walt Disney.

I has worked for more than 30 years advocating for, and educating about access to outdoor recreation and tourism for people with disabilities. I hold a degree in Recreation Therapy and was a travel agent specializing in accessible travel for many years. In this capacity, and now as Associate Director at Wheelchair Traveling, I consult with the travel industry about accessibility, conducts disability awareness trainings and writes about travel and outdoor recreation. I also authored a book titled, A Wheelchair Rider's Guide: San Francisco Bay and the Nearby Coast, about accessible trails and has produced several access guides to San Francisco. My most current project is a website of accessible trails along the entire California Coast (www.wheelingcalscoast.org). My extensive experience as a wheelchair rider combined with her professional experience has provided me with in-depth knowledge about inclusive tourism and outdoor recreation.